Feeding Bodies and Minds since 2008

As promised, a couple of pictures of what old Ferguson mechanics know as “The Grey Menace.” I’m not too sure about the menacing part. Ol’ Eminence Grease looks a little forlorn in these pictures from just after Christmas. 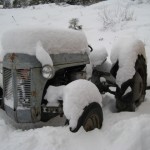 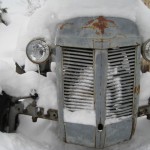 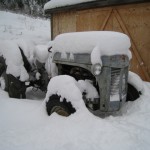 Before it arrived on my doorstep, the previous owner had started the process of stripping the engine for repair. The gas tank and radiator are stored in the tool shed awaiting testing and repairs, and the carburetor (or “carburetter” if you read old British service manuals) is awaiting the arrival of a rebuild kit. Shortly after these pictures I shoveled some of the snow away so I could get close enough to spritz the mainfold nuts with Aero-Kroil. Last weekend I got the manifold off, at the cost of one stud that backed out. I’ll be replacing the studs anyway, so this is just making my job easier.

Once the snow leaves, I’ll transport the carcass to Douglas Lake Equipment, where we’ll investigate what “went bang.” Getting parts may be complicated, but here’s why restoring an old tractor like this makes more sense to me than buying the latest turbo-diesel, shift-on-the-fly, all-hydraulic wonder:

Look at that thing. Except for the engine, it’s the same tractor as a Ford 8N. Ford and Ferguson worked closely together — Ford designed the tractor, Ferguson designed the three-point hitch and implements to work with it, the “Ferguson System” that is now nearly universal. Ferguson built them under their badge in the UK for the British market (the TEA-20, or “Tractor England, A-20” with an OHV engine by Standard), Ferguson built them under their badge in the UK and the US for the export market (the TO-20 or “Tractor Overseas” with a Continental OHV engine), and they were built in the UK with the Continental engine as the “TE-20” or “Tractor England.” Then of course there are all those very close cousins, the 8N, built by Ford with a flathead engine.

Suffice to say that getting most of the parts is not a problem. The devil’s in the details, however — and when it comes to the engine getting parts is just a little more difficult. Not impossible, mind you. What I hope to achieve here is a good tractor for a relatively lower investment. A machine that we can use on the acreage year-round.

With only a few tentative parts off right now, I’m really hoping this thing isn’t knackered. Experience with old iron says that if most of it’s still there, then you’re probably OK. Here’s hopin’.

Theme by Anders Noren — Up ↑